Dahlia: On the August Flower Agenda 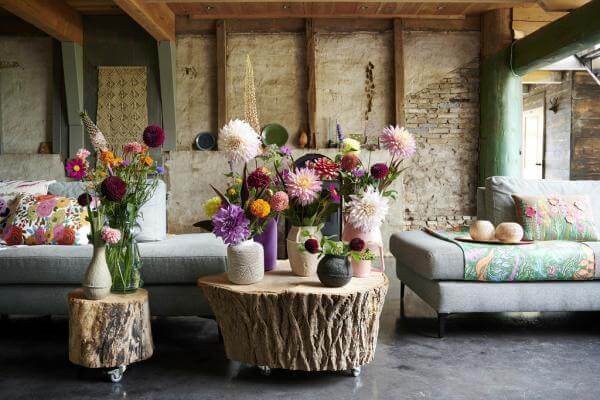 The dahlia can easily win any versatility competition. It doesn’t just thrash its rivals when it comes to colours; the enormous variation of size and flower shapes also makes it exceptional.

Origin
The dahlia is a tuberous plant that originates from Mexico, Guatemala and Belize. The flower made its way to Europe at the end of the 18th century. The name dahlia is a tribute to the Swedish botanist Anders Dahl, a student of Linnaeus. Dahlias have the most variations in colour and flower shape of all cut flowers. From dark purple to white and bicoloured and multicoloured varieties, it boasts all the colours of the rainbow. The flower’s diameter also offers endless variety, from a couple of centimetres through to large flowers with a diameter that can reach 25 cm. And then there’s the very great variety of flower shapes. The dahlia really is unique.

Assortment and range
Dahlia breeders are rapidly developing new varieties in all sorts of flower shapes, colours, lengths and sizes, as well as dahlias with an extra-long vase life. Some 1000 different cultivars are currently traded every year. The leaves range from green to somewhat russet. Amongst the flower shapes, we differentiate between single-flowered. semi-double and double-flowered varieties, pom-pom dahlias, star dahlias, (semi-)cactus dahlias, waterlily dahlias, anemone dahlias, decorative dahlias and giraffe dahlias. The biggest and most popular dahlia cultivar is ‘Café au Lait’ and its two sisters: ‘Cafe au Lait Royal’ and ‘Cafe au Lait Rosé’. The large pom-pom varieties are also becoming increasingly popular, as are dahlias with exotic flower shapes. The cultivars ‘Peaches and Cream’, ‘Crème de Cognac’ and ‘Crème de Cassis’ are characterised by their unusual colour combinations.

What to look for when buying dahlias

Display tips for professionals
Dahlias are highly suitable for bouquets with other seasonal flowers such as hydrangea and Physalis. At the end of August combine dahlias with squashes or Physalis branches. Placing dahlias in one or more colours together in a large vasealso looks great. A snapped dahlia flower can be trimmed short and floated in a bowl of water.

Third-party cookies that help us analyze and understand how you use this website. These cookies will be stored in your browser only with your consent. You also have the option to opt-out of these cookies. But opting out of some of these cookies may have an effect on your browsing experience